On 15 of January and To draw a smile on the face of a child who had a car accident and result of that accident both his legs were badly hurt E.A.D.E’s visited the child who was referred by E.A.D.E to M.S.F and during the visit E.A.D.E gave the child a present and he was so happy that he had received this present. The child’s mother was grateful to E.A.D.E in the role that it had in helping her son, and during E.A.D.E’s visit, we asked the doctor about the child’s condition and he said that when the child was first admitted, his condition was very bad indeed, and it could have been worse, if not for E.A.D.E’s rapid intervention and the doctor praised E.A.D.E’s efforts, urging us to continue in helping those who are in need. On our departure, the child was sad, not wanting us to go, so we urged him to get better, so he can come back to E.A.D.E centre, telling him we will be waiting for him. 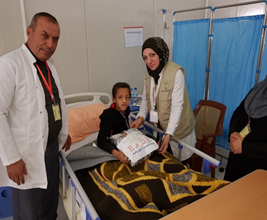